How To Use Social Media As A Recruit

It seems like there’s a million ways to derail your recruitment, and only one, clear-cut path forward. Your grades, character, life away from sports, and everything in between must be…

It seems like there’s a million ways to derail your recruitment, and only one, clear-cut path forward. Your grades, character, life away from sports, and everything in between must be squeaky clean. Not to mention, your play on the field needs to shine every day.

At Signing Day Sports, we try to make recruitment easier and more accessible to all. On The Wire today, our focus will be on an area that is becoming more important and prevalent in today’s recruiting landscape – social media.

How is Social Media Used?

If there weren’t benefits to using social media, it would be fully discouraged by all. We know, however, that it can serve recruits in a variety of ways – assuming they don’t cross any lines.

Posting Hudl film, your basic recruiting info (height, weight, graduating year, position), or any recruiting profiles can help to market a recruit. Many recruits will also reach out to college coaches or recruiters to show their interest over direct messaging.

With the collective experience of our team at Signing Day Sports, we have seen countless recruits earn themselves scholarships, or at least a second look, by properly utilizing social media.

Coaches respond well to thoughtful, purposeful social media usage. The goal of this article is to encourage recruits to continue to use social media in a way that propels them toward opportunity.

“You want your social media page to become a one-stop shop for coaches to get as much info as they can about you in a quick amount of time,” says Jordan Hamm.

Hamm is a sports reporter for Sports360AZ who covers college football. I was able to hear his expert opinions on social media usage for recruits, and hear some stories about what has and hasn’t worked.

“Social media can be a great tool as a football recruit,” he says. “But college coaches have to sift through so much film and so much information, so don’t give them a reason to move on from your film.”

What needs to be on your profiles?

Hamm listed things such as the school you play for, your GPA, height/weight, any awards, and a way to get into contact with you. You should pin a tweet that includes a link to your Hudl or the video itself. He even suggested utilizing a service like LinkTree.

“(Social media pages) are mini-resumes and they can answer a lot of questions for a coach,” Hamm states. “Make it easy for the coaches.”

Other little things that go a long way include putting yourself in your profile picture. Hamm says the picture can be of you in your uniform – this might make it even easier. 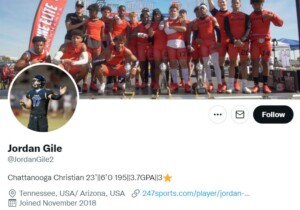 Hamm makes sure to remind recruits to always ask themselves these questions before posting:

“Every year, we see a player or coach have to apologize for something they posted on social media,” he recalls. “They could have thought it was harmless at the time, but it’s often inappropriate in multiple ways.”

This leads us into the next section: what not to do.

How NOT to Use Social Media

“Each post is a representation of you, your school, your family, your teammates, and any future school pursuing you,” reminds Hamm. “Rep them well. Think before you hit send.”

You can’t give a coach reason to doubt you. So many things have the potential to harm your recruitability. According to Hamm, your character, grades, and athletic ability are constantly being judged on social media. “Always keep it respectful,” he says, referring to your social interactions.

Like we mentioned earlier, social media has positive potential. We encourage athletes to learn how to use it. But how exactly have people used it in a negative way? Look no further than college football.

In 2008, Buck Burnette, a former Texas Longhorns football player, made the mistake of a lifetime. After the presidential race concluded and Obama was announced as the victor, Burnette took to Facebook to voice his opinion.

Burnette chose to post an update that called for “all the hunters to gather up” and to “go after” the newly-elected president. He also used a racial slur to refer to Obama.

Of course, he was promptly released from the team. He apologized in what seemed like an ill-fated attempt to clear his name through his PR team and he derailed what could’ve been a promising football career.

“In most cases, the best option is just not to respond,” reminds Hamm. “Let your play do the talking.”

Yes – it’s a convoluted space. Social media is confusing. Something you’re doing might seem harmless, but may be writing you off as a recruit in reality.

I asked Hamm; what are some things on social media that athletes may think are benefiting them, but are actually doing the opposite?

“I’m not a huge fan of the bulk-tagging that can come with tweets,” he replied.

Bulk-tagging is a practice used by recruits wherein they “tag” dozens of profiles of recruiters, college coaches, sports writers/reporters, and other accounts in a link of their highlight tape or play, in the hopes that this will spark interest in them as a recruit.

“If you were to tag some profiles here and there, or DM the link to other accounts, that will help build a bit more of a connection,” Hamm said. “It takes more time, but it should be all about building relationships.”

For social media in general, that should always be the goal. If you are able to properly build relationships with anybody you interact with on your accounts, you put yourself in the best position to receive interest, positive attention, and ultimately receive offers.

Tagging dozens of people will come across desperate and won’t allow you to adequately nurture those important relationships.

“It’s important to remember the human connection part,” Hamm reiterates. “If you send a DM of a HUDL play or highlight, make sure to include a short message.”

Build your connections. Remember that anybody you tag in Tweets will be more inclined to help or repost if they feel like they have a closer personal connection with you.

For athletes, social media acts as a resume of sorts. The content on your page should fall in line with that idea in mind. As a college football reporter, Hamm follows and interacts with athletes often. And there are many ways that an athlete can veer away from using social media to their benefit.

“The types of accounts that post every thought in the users’ heads can be a bit much,” explained Hamm.

Would a job-seeker post irrelevant information on their resumes? Is what you’re about to post more of an inside joke?

Most importantly, does the public really need to read this?

If you are able to minimize the unnecessary posts, and ensure that your accounts are tailored to help you in your recruiting journey, it should be smooth sailing. Of course, nobody would want to annoy a person who’s in a position to help you be recruited.

Something else that Hamm brought up in regard to annoying social media habits caught my ear. It would seem that recruits’ parents can negatively impact how their kids are perceived. And they often do.

“Most players are usually pretty good, but a parent can go over the top and harm a student-athlete’s chances at getting recruited,” said Hamm. “A coaching staff doesn’t want the headache of a high maintenance parent.”

Whether you’re a recruit, or a parent reading, keep this in mind. Hamm has seen parents try to “argue” on their kid’s behalf. While understandable in nature, seeing these types of social media interactions actually harm an athlete.

For a parent, make sure to keep it positive, be supportive of your child and their teammates, and don’t publish anything that can be interpreted in a negative way.

It should be apparent by now how impactful your social media usage is.

Consider all the stakeholders before publishing something implicating. Not only can your recruitment be derailed, but your post can reflect negatively on a variety of other entities.

At Signing Day Sports, we love to interact with our athletes on our social media pages, and we hope to see members of our platform continue to positively utilize these platforms in their recruiting journeys. Good luck to you all!