Don’t let anybody tell you what you are capable of.  Who is anybody else to cap your potential or tell you what opportunities lie ahead? Today, on The Wire, read…

Don’t let anybody tell you what you are capable of.

Who is anybody else to cap your potential or tell you what opportunities lie ahead?

Today, on The Wire, read about a college football program that’s shocking the nation. What’s more? They are doing so as noted underdgos, from their coaches to the athletes themselves.

This year’s Tennessee Volunteer college football team is a great example of how important perseverance is. They’ve already proved their naysayers wrong, and they’re just getting started. And in today’s college football recruiting landscape, they serve as a reminder that recruits’ star ratings are not the only things that matter.

Since 2008, Tennessee has had more losing seasons than winning seasons. Only two seasons have seen them end as a nationally ranked program.

Suffice to say, the Volunteers days of winning national championships and competing in the SEC as perennial contenders were long past. Phillip Fulmer carried them to heights that haven’t been reached since his departure in 2008.

What’s followed since is a decade-plus long yearning by Volunteer stakeholders to reach the pinnacle of college football again. However, efforts have fallen short. The Volunteers are already on their fifth head coach since Fulmer stepped down – a sign that a program is not meeting expectations.

Yet again, heading into the 2022 season, the preseason AP poll showed Tennessee on the outside looking in. No one believes in these guys.

Two years ago, when Josh Heupel took over head coaching duties, the Volunteers experienced an offseason in which more than 30 student-athletes transferred away. There was an impending NCAA investigation and a university-sanctioned investigation into recruiting wrongdoing that led to the firing of Jeremy Pruitt, their previous head coach.

Chris Low, a senior writer with ESPN, calls this Tennessee team one that has risen from the football ashes over the past decade made up of a lot more five-star stories than five-star players.

“A lot of guys on this team were told what they weren’t or what they couldn’t do,” said junior receiver Jalin Hyatt, a wide receiver on the team who was underrecruited. “That has a way of bringing a team together because you know what the guy beside you had to do just to get here.”

This team has banded together, with all of their unique backgrounds and football upbringings, to write their own underdog story.

“Up and down Tennessee’s roster, there are castoffs, transfers who were given up on by their previous schools, breakout players who have seemingly come out of nowhere, players who have battled through adversity or were spurned during the high school recruiting process and coaches who were fired,” said Low.

Their quarterback, Hendon Hooker, was ousted by Virginia Tech and ended up in Knoxville as a transfer. Hyatt wasn’t recruited by either one of the D-I schools in his home state of South Carolina. Chase McGrath, Tennessee’s kicker, and hero against Alabama is a transfer from USC. Cedric Tillman, another wide receiver, arrived to the program as a two-star recruit, only garnering any attention from schools like Hawaii, UNLV, and Weber State.

As crazy as it would’ve sounded two years ago, the Volunteers’ expectations have risen to the point that not reaching the College Football Playoffs would be a disappointment. Remembering their backgrounds, and what got them to this point, is what keeps their newfound dream alive.

“This has always been a special place to me, and to play even a small part in its resurgence means a lot,” said Rodney Garner, a defensive line coach with the team, and someone with a castaway story of their own. “I’m proud of the way these guys have played for each other, just like those teams in the ’90s. It was always more about Tennessee than it was about the individuals. That’s the thing we had to get back to when Coach Heupel and all of us got here.”

Byron Young is the heart and soul of the Volunteers. His leadership on the defensive side of the ball, coupled with his background makes him the perfect example for young athletes to look up to. After high school, he attended a prep sports academy in Alabama. After the academy folded, he returned home to work at a variety of part-time jobs for more than a year. 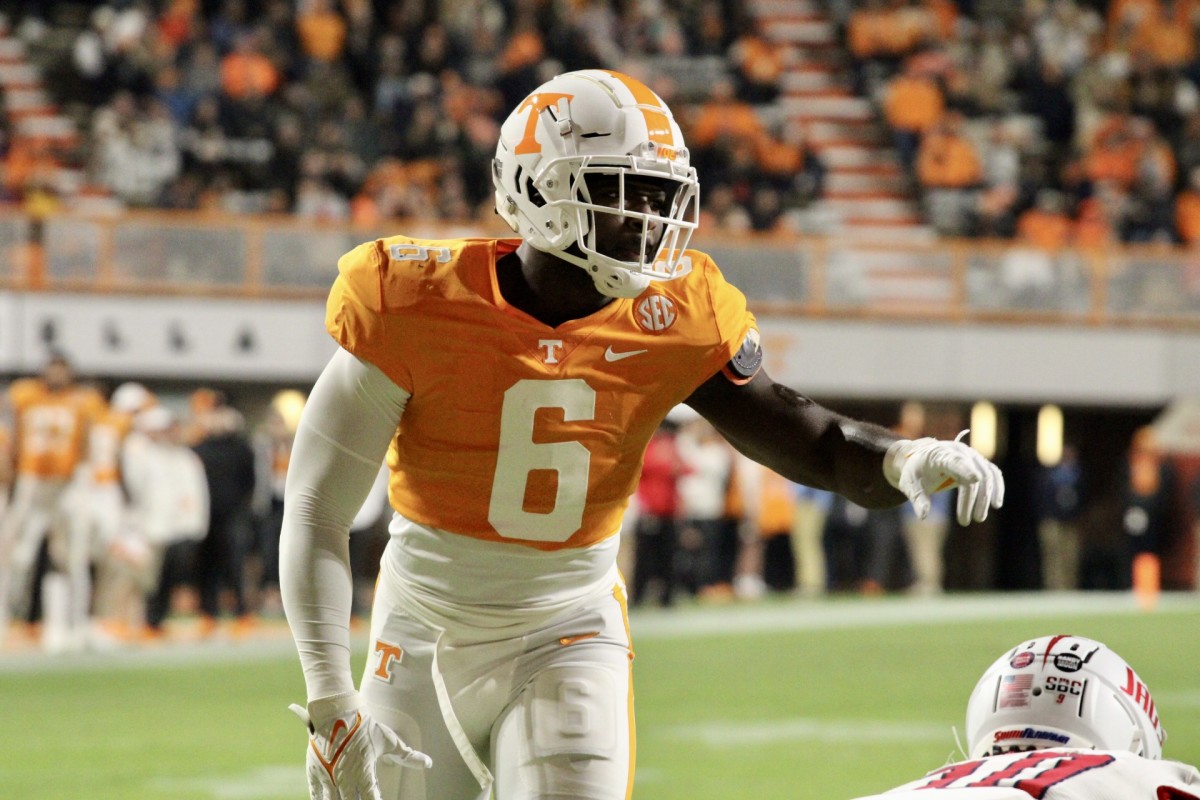 Byron Young with the Volunteers

Soon he would try out for Georgia Military School’s football team, which provided him with enough game film to get his name out there at the D-I level as a junior college recruit. Sure enough, there was interest. SEC interest. And as luck would have it, he ended up right where he belonged.

“I went the long route to get here and so did Hendon (Hooker). We weren’t the only ones,” Young said. “A lot of guys had to find new places to play. We’ve found that place, and we’re not close to being done.”

This story isn’t to say that it can happen to anybody. But it can and does happen. These athletes’ stories should shine light on those who aren’t necessarily blue-chip prospects, or who needed to go the JUCO route for whatever reason. No matter the circumstances, if a young athlete thinks they can compete at the D-I level, D-II level, or wherever their aspirations lie, they can. It is only a matter of doing whatever it takes.

Tennessee is currently ranked #5 in the College Football Playoff rankings. They have two games left against South Carolina and Vanderbilt. If they win out, their sole loss will have been against a likely unbeaten, and unquestioned #1 in Georgia. This blemish is all but forgiven by the Playoff committee if this were to be the case.

Here’s to hoping they can make their unlikely dreams come true and continue to shock the nation.